Retro View: Greystoke-The Legend of Tarzan Lord of the Apes 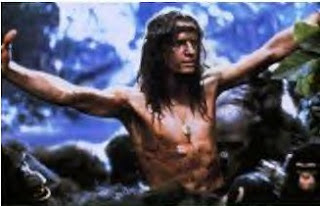 With John Carter now getting his big budget moment, let's take a look back at John Clayton's big budget moment.
Surviving a terrible boat crash that leaves them stranded, Lord Jack Clayton and his pregnant wife Alice setup shelter best as they can while awaiting rescue. Before long their son is born, Alice dies and John is killed by a gorilla. A female gorilla-Kala-finds the baby Clayton and decides to adopt it as her own in place of her dead infant. From there the story follows the boy as he grows up amongst the apes into an adult (Christopher Lambert). His peace in the wilderness is shattered when he rescues Phillipe D'Arnot (Ian Holm) from savage natives and D'Arnot, discovering the jungle man's true identity, convinces him to leave and go to England. Once there our hero is warmly welcomed by his grandfather, the Sixth Earl of Greystoke (Sir Ralph Richardson) and the Earl's female ward Jane Porter (Andie McDowell). But John finds life in civilization even more cruel than life in the jungle and he ultimately must make a choice-stay and be the new Earl of Greystoke or return to his life in the jungle.
By the time Greystoke was released in 1984, Tarzan had went through every possible permutation you can imagine on screen-from Johnny Weissmuller to Bo Derek. This version was notable at the time for several reasons. First the film was a large scale production with some notable talent behind the scenes-director Hugh Hudson (who directed the 1981 Oscar winner Chariots of Fire), screenwriter Robert Towne (of Chinatown fame-even though Towne later took a pseudonym when his script was reworked) and a crew that included editor Anne Coates (Lawrence of Arabia) and makeup genius Rick Baker. It also boasted Sir Ralph Richardson in one of his last performances and promised a more mature approach to Edgar Rice Burroughs' character-no stereotyped natives, no Cheeta or Boy, no "Me Tarzan, You Jane" dialogue. John isn't even called Tarzan in the film.
But that is possibly the problem. Greystoke starts out pretty good and faithful to Burroughs' original novel-from the Claytons setting up a makeshift house to Tarzan growing up and establishing himself amongst the apes. These scenes are also helped by filming in Cameroon and Baker's excellent ape suits. Once things shift to Greystoke Manor things begin to unravel. One problem it seems is that large chunks of the film seem missing (even at 2 hours and 20 minutes.) A deaf and dumb servant suddenly seems to appear out of nowhere and befriends John and disappears also without notice while the film seems to setup a rejected suitor for Jane (played by James Fox) as possibly the antagonist of the film only for him to also disappear. I wonder if this was because of the rewriting or the film being too long. Also the film is one of the most depressing films I think I've ever seen. It doesn't seem that 20 minutes goes by without someone dying and leaving John howling in grief-which grows wearying after a while. And finally the major stumbling block is the recasting of the character of Jane and a lack of chemistry with John. Some of that can be attributed to the change in location-there is no romantic swing through the jungle but a rather silly scene in which John makes monkey noises while seducing Jane-and to the casting. Lambert is pretty stiff and seems uncomfortable delivering his dialogue in English (thankfully like in the novels the filmmakers allow John to have a French accent, which Lambert has) while McDowell seems passionless in the part-which could have something to do with her be re-dubbed in post because the filmmakers thought her American accent was out of place. The irony is they hired Glenn Close who 15 years later would voice Kala in Disney's Tarzan.
The film does have some virtues-it looks stunning in both the jungle and the mansion, the music score is sweeping and Richardson brings both warmth and humor to his role. But ultimately Greystoke is one of those films that Roger Ebert once described as being easy to admire rather than enjoy. I admire the film's ambition to do something different with a well-worn character. But I can't say I enjoyed it. ** out of 4
at June 22, 2010