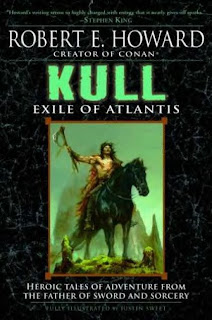 Again I can't come up with an opening. So let's just go on to Valusia.
Created by Robert E. Howard in 1926, Kull was Howard's second attempt creating a hero in what would become the sword and sorcery genre after Am-Ra the Ta-an. Howard would write only a handful of stories and see only three in print-"The Shadow Kingdom," "The Mirrors of Tuzan Thune" and "Kings of the Night," the last one with Kull in a supporting role to Howard's Pictish hero Bran Mak Morn. Howard would rewrite one story-"By This Axe I Rule!"-into "The Phoenix on the Sword," the first story starring a familiar Cimmerian. The remaining stories would not see print until the 1960s and beyond.
Which is a shame. While I know this will seem like blasphemy to Howard die-hards, I prefer Kull more to Conan. I know let the screaming and cursing start. But these stories deliver the goods in ways I never fully got from Conan. One thing I like about them is the fact that Howard has an actual supporting cast for Kull to react to-from the Pictish Brule the Spear Slayer to the exasperated advisor Tu-something the Conan stories lack. There is also more of a chronology to them. No jumping back and forth in time as with the Conan stories but a more linear time frame. I'm not saying Conan isn't great-in fact stories like "Red Nails" and "Phoenix" top the stories here-but as a whole Kull is to me more satisfying.
I also have to give Del Rey props for the entire approach to Howard and his work. The paperback collects all of the Kull stories plus surviving fragments of Am-Ra and early drafts along with two essays that puts Kull in perspective of both the fantasy genre and in Howard's work. So if you only know Kull from Kevin Sorbo (and I'll be giving my two cents on that film soon) you owe it to yourself to give this collection a chance. **** out of 4
at June 12, 2010

I love the Del Ray editions of Howard's work and have picked up every one of them so far. And I agree with what you said about Kull, although I can't quite bring myself to prefer him over Conan.

The artwork in this book is great too, I only wish that the full-colour versions were not limited to the super expensive hardcover edition of the book.

And yeah, it's a shame that what springs to most people's minds when Kull is mentioned (if anything) is an image of Kevin Sorbo...

Hey now, it's no blasphemy to prefer Kull over Conan: I know plenty of Howard fans who think the same. Indeed, just about every Howard character is someone's favourite over the big C: El Borak, Bran Mak Morn, Solomon Kane, Steve Costigan, Breck Elkins and even more have their champions. My own is Dark Agnes.