Book Review: Tarzan and the Jewels of Opar 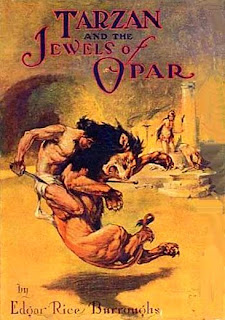 I know-its the most haphazard blog ever. But a book review for once.
As our story opens it finds John Clayton (aka Lord Greystoke; aka Tarzan) in a situation that many can relate to now-he's broke as his company has went belly up. Needing some quick funds Tarzan decides to brave a return trip to Opar, the underground kingdom that he barely escaped from before. But just as he's about to leave he gets bonked on the head and loses his memory, having him revert back to his ape like ways. Oh there is also a Belgian named Albert Welper on the run for murdering his superior who has eyes for both the loot and Mrs Clayton; Achmet Zek, the Arab bandit who needs to get Tarzan out of his hair to resume his business (mostly selling slaves and the like) and La, the hot High Priestess of The Flaming God of Opar who mostly just wants Tarzan...in the Biblical sense.
I have to admit that I've always been lukewarm when it comes to the Lord of the Apes. Part of it might have been the first exposure I had to the character was TV reruns of the Johnny Weissmuller films. Later when I did begin reading the novels I found them while well written for the pulp audience they still didn't grab me as much as John Carter, Carson Napier or even Burroughs novels like The Moon Maid or The Land That Time Forgot. Part of the problem is just the plot I described above-Tarzan somehow gets separated from his wife (usually by the machinations of some evildoer who has designs on Jane) and spends his time running around the jungle; Jane spends most of the novel getting captured, escaping, get captured again and being leered at; and the villains are interchangeable-a strong reliance on foreign crooks and evil Arabs.
What at least makes Jewels of Opar a quick read (besides the short page count-the paperback I have is barely a 160 pages) is at this point that familiarity. You expect all of these things to happen and Burroughs lays them out in spades. There is also some unintentional humor that comes up-especially with La who seems to veer back and forth in her love and hate for Tarzan more than Glenn Close in Fatal Attraction. One section she even has him tied up and does nothing with him-again morals of the time probably didn't allow even a man with amnesia to dally with another woman but who didn't want him just to give up boring Jane and run off with La-at least she isn't being packed off by the nearest Arab for sale.
In the end Tarzan and the Jewels of Opar is an okay read. It may not be the best Tarzan book (that still seems to be the first novel) but compared to the last two I read (The Beasts and Son of Tarzan) it is better paced and more fun in a predictable way. (Also on a side note I'm just waiting for the announcement that Sam Worthington or one of the Twilight stars will play Tarzan in the upcoming new film, since at this point you can't make a movie without one of them being attached or rumored to star.)
at March 15, 2010