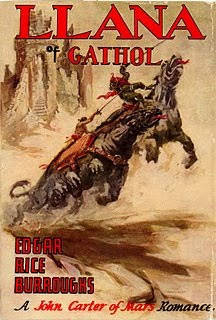 A Reviewer's Note: This review has been altered.

Sorry for the delayed trip back to Barsoom...

After the standard visit to his favorite Earth-bound nephew, John Carter begins spinning his latest adventures which starts while out for some "me" time. Flying over the apparently "dead" city of Horz, he rescues a man from Green men to discover the latest unknown species-a white race living inside the city. But proving no good deed goes unpunished he is taken prisoner for fear he will reveal their existence. Sent to the pits with the man he rescued, Pan Dan Chee, he begins to play Jetan when Pan falls for the likeness of one of the game's pieces-modeled after John Carter's granddaughter, Llana of Gathol. And as you can guess from the title it isn't too long before Llana herself shows up and gets swept into an adventure involving suspended animation, a settlement of the First Born, a braggart who intends to conquer Barsoom and take Llana for himself and some invisible menaces.

As mentioned in my review of Escape on Venus, Burroughs wrote this novel as four interconnected novellas. Unlike that one though, Llana of Gathol maintains at least a through-line : John Carter's attempts to stop the apparent Jeddak of Jeddaks Hin Abtol from conquering Barsoom and John's attempts to rescue his granddaughter. And it is an improvement over Synthetic Men of Mars thanks to keeping John Carter front and center. What also makes the novel interesting is that like Carson of Venus, Burroughs shows his opinions of the Nazis with Hin Abtol, a petty tyrant who thinks he deserves to conquer the world. While it isn't on the nose as the Zanis that Carson has to fight, it's still present.

Where this one falls short though is the episodic nature with John and Llana escaping, being captured and escaping again. This one also runs through some of the same ideas-invisible enemies, another woman who can't seem to resist the Warlord of Mars (which does cause some humor when he admits he feels awkward being a grandfather who never ages while being seduced)-all those tropes are present and accounted for. I guess what I was hoping for was a grand final go around but instead it's just a regular day for our hero.

Ultimately as the final complete novel of the series, Llana of Gathol isn't the grand slam finale the series deserved but an okay book. But you can't have everything. Rating: **1/2 out of 4
at October 14, 2009