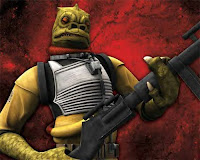 Yep as the picture tells, the famous bounty hunter makes his animated debut in Star Wars: The Clone Wars, which returns tonight on Cartoon Network under the subtitle "Rise of the Bounty Hunters." I know many dismissed it early on after the movie but the show rebounded and definetly looks good this season. I'll let you know what I thought after I watch the premiere.

UPDATE-Well no Bossk. Still the premiere did give the viewer plenty of new bounty hunter Cad Bane in action. The episode all showed a lightsaber wielding librarian and a fussier robot than C-3PO. I'll just have to wait and see if we see our favorite Trandoshan.
at October 02, 2009