'The Legend of Tarzan' Stands at $347 Million WW 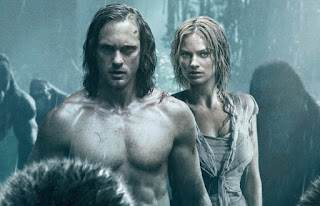 With the summer winding down it looks we're also winding down on The Legend of Tarzan's run at the box office. As of right now Box Office Mojo has the film at a worldwide gross of $347 million, with the US box office steady at $124 million http://www.boxofficemojo.com/movies/?page=main&id=tarzan2016.htm . On the one hand that's much better than most of the earlier predictions, where the film was a certain failure opposite stiff competition such as The BFG and Independence Day: Resurgence and certainly higher than such mega-bombs like Warcraft and Alice Through the Looking Glass. On the other hand it seems to be in a group of films (like Ghostbusters, Star Trek Beyond and recently Jason Bourne) that failed to make a profit for its studio. Indeed if we go by the old rules of a film having to make twice its budget, Tarzan is short by $13 million, which if that was it is not a bad figure. But thrown in marketing and print costs and it is still short. So where does it go from here? Depending on how the film does on home video it could ultimately make a profit but probably not enough to convince Warner Bros. to continue with a sequel unless it does really good in the ancillary market (DVD, digital download, streaming, etc). I guess the one victory here is for ERB fans who for once got a Tarzan movie that brought the characters that Burroughs wrote to life without sacrificing what made them stand out. For fans that is the victory so embrace it.
at August 15, 2016