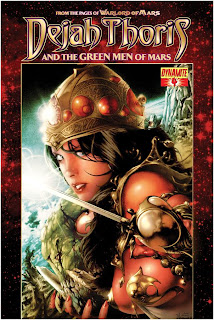 This week's comic book review finds Dejah on the run and some bloody retribution.


Following her escape last issue Dejah delivers swift justice to her kidnappers and sees a way to escape when Voro the Thark returns. But she decides to let the other captives get their revenge instead. Shortly afterwards John Carter and Tars Tarkas find her and the group put an end to the horror. Returning to Helium Dejah decides to keep quiet about her encounter to maintain the peace. But the peace is about to be rocked and her secret may be revealed.

At this point I was about to give up on this series. The "torture porn" aspects were off putting and the plot offered little redeeming qualities. So I was a bit surprised how well this issue was. Granted there is blood but it wasn't as off putting as earlier and the issue seemed to wrap up the story quickly. However it has been extended for another four issues so I wonder what writer Mark Rahner has in store. Personally this would have been enough here.
As usual the artwork is nice and bright courtesy of Lui Antonio so no complaints there. Also a thumbs up to cover artist Jay Anacleto for his work so far.

I still have problems with the story and I'm not thrilled with it going another four issues but that's not my call. I hope like this issue it improves. That's my two cents folks. If you disagree or agree leave a comment below.