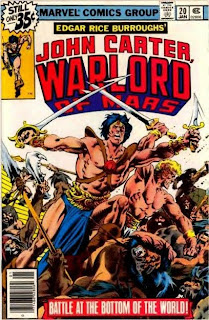 We've reached the halfway point in Marvel's series of Barsoomian adventures. And here we get a new writer, a new storyline and action. Plus Dejah Thoris in a sports bra.

Issue 16 begins The Master Assassin of Mars and opens with a shock: "John Carter is Dead!" Celebrating his second wedding anniversary John drinks some wine and slumps over apparently dead. A slave girl named Daria announces she's guilty and working with a new group the Guild of Assassins but is killed before she can reveal any useful information. With Helium in mourning Dejah Thoris vows vengeance and heads off to find the people responsible. But in true Burroughsian fashion, John isn't dead, his Earthly metabolism counteracting the poison (at least according to his doctor). When he finds out Dejah has went off on her quest he flies after her and the two are reunited and well as John puts it "I won't dwell on what happened next" (I guess those fliers have fold out sleeping silks and furs.) But before they can return home John notices a huge canyon that suddenly causes Dejah to panic and tell him to turn around quickly. But it's too late-strong winds smack into them and cause them to crash. And be found by some "shapes moving towards" them.

And those shapes? Well issue 17 "What Price Victory?" reveals them to be men with wings! One carries off Dejah and John is eventually overtaken and they fly off. Eventually John wakes up in a palatial bedroom and all is revealed: they are Orovars the mythical beings who once inhabited Barsoom, only in this case they have mutated into giants with wings and are living in the land of Karanthor. John quickly meets Gar Karus, Jedwar of the armies and Garthon, a regular size Orovar who is Gar Karus' son and tells him not to reveal his marriage to Dejah. Along the way John discovers that the red people are seen as an inferior race by the Wing Men and that Dejah is in the slave pits. But when she comes up for auction, John attempts to buy her but gets into a scuffle with another warrior which causes the cruel leader of the Wing Men, Chan Tomar to buy her for himself. Can John overcome his loss and rescue his true love?

"Meanwhile, Back in Helium" (as issue 18 is titled) Tars Tarkas finds himself with is own problems-he has been challenged for leadership of the Tharks by Barak, a Thark who feels that the Tharks should not work with the Red Men of Barsoom. Tars reluctantly agrees to fight him and leaves Helium for their duel. Arriving in the dead city of Maharn Tars and Barak duel only to be interrupted by strange hands coming out of the ground and both men have to save each other from this new threat.

We return to John and Dejah in issue 19-"The Valiant Die But Once" to find John has risen in ranks thanks to his skills and white skin among Gar Karus' army. But his anger seeing Dejah with Chan Tomar bubbles over and he confronts Dejah whose attempts to explain why she's with Chan Tomar falls on deaf ears. Heading off John is attacked by friends of the wing man he fought in issue 17 but he is rescued by Garthon who tells John the story of the Orovars and how they ended up in Karanthor. John also finds out the Garthon is in love with a red slave named Hira. But John and Garthon soon face a new problem-an attack by the Ptothians, a race of savages that intend to destroy Karanthor.

And that's pretty much the plot of issue 20 "Battle at the Bottom of the World!" As John and Garthon lead the battle they are able to beat back the Ptothians. John also finds out why Gar Karus dislikes his son-his lack of wings and his love of poetry and gardening. Eventually the Ptothains retreat and John decides it's time to rescue Dejah and leave. Garthon agrees to help, revealing a secret passage out of the city and back to the outside world. But when John goes to get Dejah Chan Tomar is ready....

With the exit of writer Marv Wolfman after issue 15, Marvel brought in a new writer-Chris Claremont, who would become famous later for reviving the Uncanny X-Men and turning it into one of Marvel's most durable franchises. And with these opening issues of his run, Claremont does a pretty good job. In fact it's pretty close to a standard Burroughs novel-a new country, treachery, lecherous bad guys, John Carter in all his sword clanging heroics. I also liked the stand alone issue of Tars Tarkas-who I felt was getting short changed before-and the introduction of the Guild of Assassins, which Burroughs had introduced in Swords of Mars, so it ties in nicely.

Not to say there isn't some flaws-the biggest being Dejah Thoris herself. She goes quickly from grieving widow to vengeance seeking a little too quickly to be believable and then her sudden change to Chan Tomar's love slave seems out of character with the woman we've seen so far. Also while I liked the use of the Orovars the Wing Men concept is too Flash Gordon for my tastes. And why in the Tars issue the demon hands? I also couldn't help but wonder about Garthon-a poetry loving gardener? Does Barsoom even have tree hugging hippies?

Art wise these issues use one continuing artist-Ernie Colan-who brings a nice design and a steady look to the series. His drawings of John and Dejah are quite good while the battle scenes are handled brilliantly. For issue 17, though a "guest penciler" (as it is noted in the credits) was brought in-the one and only Frank Miller and he brings a great look to Tars Tarkas and the issue as a whole. So to sum up, these issues are pretty first rate, even if they do have their quirks-yes Dejah Thoris in a sports bra and panties which seems modest compared to her recent "outfit" in the Dynamite series. Oh well it was the 1970s so we'll let it go.
at March 17, 2011

I've been tweeting these reviews to my follwers. Meanwhile, check out this Flickr gallery of the 28 + 3 covers. Amazing detail if you know how to change image sizes! http://bit.ly/i0Legx

Again thank you for the mentions and the Flickr link. I also hope you don't mind the shout out in the Face of Mars posting I did.