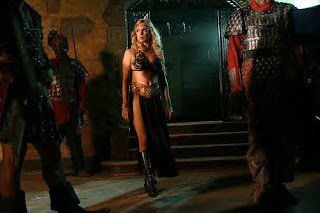 Since things are quiet on the big budget John Carter of Mars front, Asylum's Princess of Mars film has finally an IMDB page-http://www.imdb.com/title/tt1531911/ with some members of the cast listed. It looks like most of the main characters from the novel are retained-including Tars Tarkas (played by Matt Lasky), Kantos Kan (Matt Logan), Sola (Noelle Perris) and Sab Than (Chacko Vadaketh). However Asylum has added three new ones-a character called Sarka (also being played by Vadaketh), Cornwell Sams (played by Tomas Boykin) who I guess is filling in for the James Powell character and Saroh Kan (Kimberly Ables Jindra)-is that Kantos' wife, mother, etc? We'll have to wait and see how these characters are intergrated. (And yes another pic of Traci Lords in her Dejah Thoris-by way of Jabba the Hutt's slave tailor.)
at November 07, 2009