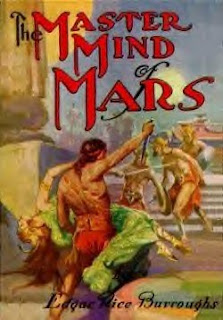 Reviewer's Note: This Review has been modified
Back to Barsoom....Only this time with a different visitor.

Ulysses Paxton is a US soldier off in the battlefields during WW1. When a mortar shell ends up killing his men and causes him to loose his legs, Paxton begins to reach out towards Mars and before he knows it, he's on Barsoom. Actually he ends up landing in the house of Ras Thavas, an elderly scientist with great powers-he can change the brains of those aging for younger bodies. Trapped there, Paxton, called Vad Varo, becomes Thavas' assistant and learns his tricks. What ends up turning against his former teacher is Valla Dia, a beautiful specimen whose body is switched with the wicked and aging ruler of Phundahl, Xaxa. Teaming up with three others who have been sold to Thavas-the assassin Gor Hajus, Dar Tarus (whose own body has been switched with that of Xaxa's second in command) and Hovan Du, whose brain resides in the body of a Great Ape-Paxton rushes off to reclaim the body of beloved. And that's where the fun begins...
Looking back at the whole series as a whole, I guess my mind has changed (no pun intended) with Master Mind. I had written earlier that it rank pretty high in the whole series for me but know having reread it since the original review, I find it somewhat lower. What works here is the villain-Ras Thavas in fact might be Burroughs' best villain of the series-an intelligent scientist who doesn't need to have super powers. (A possible Lex Luthor influence?) In fact Thavas is a more interesting figure than Paxton is which probably explains why Burroughs brought him back for Synthetic Men of Mars since he still has much to offer. Another point is the religious satire that permeates the novel. From Ras Thavas' almost God-like view of himself to the backwards religion of the Phundahls-Tur is Tur after all-it provides a biting look at what happens when people are mindless and led easily.
Now if only it had a stronger hero. Sadly Paxton lacks John Carter's charisma and even falls a little short compared to Gahan of Gathol or Tan Hadron of Hastor. While I do like the setup of him being familiar with John Carter's previous adventures he just doesn't do much for the first third of the novel except plan for restoring Vallia Dia back to her body. When the action finally does take place, well a talking Great White Ape will likely upstage anyone.
Ultimately this one gets a ***1/2 out of 4 thanks to having the best villain in the series. Maybe if the film series gets this far we can see Thavas center stage. Heck he's a lot better than Matai Shang.
at August 23, 2009