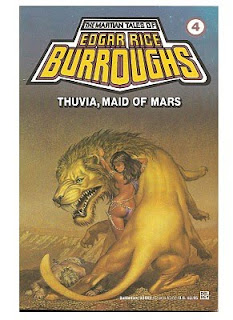 Reviewer's Note: This review has been changed from the previous one.
I know, I know, out of order but this is the first one I've read since I began this so here goes.
Thuvia of Ptarth is having guy troubles. Already promised to Kulan Tith, the Jeddak of Kaol, she's got two other wannabe suitors. (An intergalactic Bacherolette episode). Competing for her attention is Astok, Prince of Dusar, who in the first chapter tries to get fresh with our leading lady and Carthoris, the Prince of Helium, son of Warlord of Mars John Carter and our hero, ladies and gentlemen. After saving Thuvia's dignity from the unwanted advances of Astok, Carthoris also blurts out his love but since she's already engaged gets rebuffed and heads home. Then the real problems start for Thuvia gets carried away literally and Carthoris is blamed for the disappearance. Hoping to clear his name and prevent a full scale war, he heads off, only to see his glider tampered with and his crash landing into an isolated area of Mars. Eventually he finds Thuvia, the barbaric Torquasians, green men who have a thing for red women and the lost kingdom of Lothar, where invisble archers came be summoned at will by the crazed Jeddak, Tario. Of course it isn't too long before out hero finds out who is to blame...but war is looming.

Coming after the opening trilogy, Thuvia is an indication of where the remaining Barsoom series would go, with the planet itself really the major star of the series, not John Carter. For most of the later entries-especially Chessmen and Fighting Man-it would work. Here though it doesn't. Part of it is the fact that it retreads much of the plot of A Princess of Mars combined with elements of the Helen of Troy story but without John Carter's viewpoint guiding us. Maybe its the fact that unlike the first three Burroughs does not write this one with a first person viewpoint, making the reader less involved in the outcome. Also Burroughs doesn't give us that outcome, ending the novel without an epic resolution. Maybe he felt he had worn thin the whole epic battle wrap-up but it leaves the reader disappointed that it doesn't show up.
Not to say Thuvia doesn't have its charms though (and I don't mean just the cover art.) The Lotharians and their invisible archers are a clever addition and a break from the four-armed threats, while the opening chapter of life on the streets of Helium provides a welcome glimpse of the day to day life of the normal people living on Barsoom. And the action scenes deliver as usual, especially the fight between the Torquasians and the Archers that Carthoris and Thuvia find thesmelves in. In the end I guess I like it but I just don't love it as much as some of the others, so I'm curving my rating to *** out of 4. It's not the worse (that will come later) but it definetly isn't the best.
at June 30, 2009